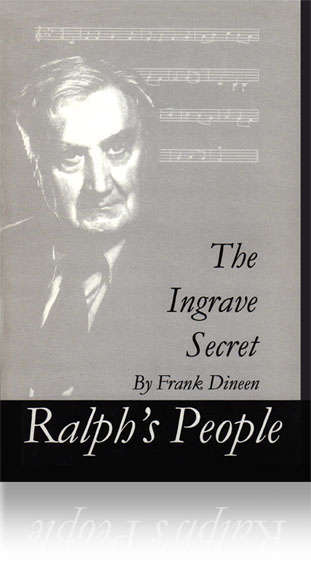 Ralph’s People – The Ingrave Secret by Frank Dineen is a story about the meeting between the composer Ralph Vaughan Williams and a 74 year-old named Charles Potiphar at Ingrave in Essex, 1903. The old labourer sang a beautiful folk-song, Bushes and Briars, to the composer. The effect of it for RVW was overwhelming – it was to influence his music forever and change his life. Frank Dineen describes these events with insights and illustrations.
It is an invaluable history.

“ This is a story of the high and the low, of youth and age, the past and the future; of the interplay of events that was to lead to a fertile meeting of opposites out of which surged a wave of creative energy that changed the course of English music.In every biography of the English composer Ralph Vaughan Williams, his meeting with Charles Potiphar, the Ingrave countryman who could not read or write, is decisive. Vaughan Williams was from the top stratum of English society, grandson of a High Court Judge whose mother was a daughter of Josiah Wedgwood III of the pottery dynasty, and a niece of Charles Darwin. Potiphar was from the bottom of the heap, a country labourer whose life was a daily struggle to survive. A yawning social chasm divided them. In the rigidity stratified society of Edwardian England, their paths could never cross and they would not meet, in the normal course of events. To bridge the gap, fate chose two middle aged spinsters, 55-year-old Kate Bryan, and 40-year-old Georgiana [Locksie] Heatley. In pursuing their own goals – Kate unwittingly, and Locksie, deliberately – they brought the two men together. Potiphar was 74 years old when they met, full of the wisdom of a long life and the lives of those who had gone before. He was the inheritor of a great store of songs and stories passed down from mouth to ear over many generations. Vaughan Williams was 31, struggling to find the musical path that would allow him to fully express the formless creative urges that surged in the depths of his soul. When Potiphar sang Bushes and Briars to the composer at Ingrave on 4th December, 1903, the soul of Vaughan Williams was charged with the energy of England’s musical past. All vacillation as to his future path ceased. The needle of his creative compass found its magnetic north.”
An extract from the foreword of Ralph’s People: The Ingrave Secret

Above: Original notation of Bushes and Briars (fragment) as noted down by Ralph Vaughan Williams in Essex on 4 December 1903